The final European festival weekend for the Farewell tour took us to Spain, Portugal and Germany. As we are two traveling parties, one from Sweden and one from Finland, we usually hook up at a layover as it's not often we have direct flights to wherever we are going. This time the final destination was Porto in Portugal, but we had completely different routes and did not meet until we both had reached the final destination. For once the flight left Sweden at a decent time, but never the less it meant that I had to leave Örebro for the roughly two hour drive to the Arlanda airport bright and early. I packed my bags into the car and got driving at 06:20, which is early for a sleepyhead as myself. I was slightly late when I got closer to the long time parking at the airport, and with about ten minutes of driving left I got a terrifying notion: I had no memory of putting my hand luggage in the car... And in the hand luggage I'd put my passport... 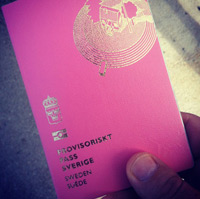 I stopped to have a look and, no, the hand luggage wasn't in the car! With some rising panic I quickly went to the airport police station and surprisingly rapid got a temporary - and very pink - passport for a quite large fee, and could return to the parking lot and eventually end up at the terminal where the other Swedes were waiting for me. Well, to say the least, I traveled light during this weekend...

Anyway: in Porto we were picked up by a large tourist type of bus and a Spanish older dude who didn't speak much English. Although we landed in Portugal, the first show was about five hours away into Spain so we got driving. For some reason, Portugal is in a different time zone, so suddenly we were very short on time and the drive felt very loooong. Once we got to Viveiro, we virtually had to go directly to the stage and set up our stuff for the show. No time for anything else and although it was quite stressful, it was the positive kind of stress. One focus, and no time to get nervous or whatever. So basically we went straight from the bus to perform and the show was great. Usually after a longer break, it's been a few weeks since the latest show, you feel a little bit rusty, but this show went smoothly, and the tent was packed with excited Spanish grinders. 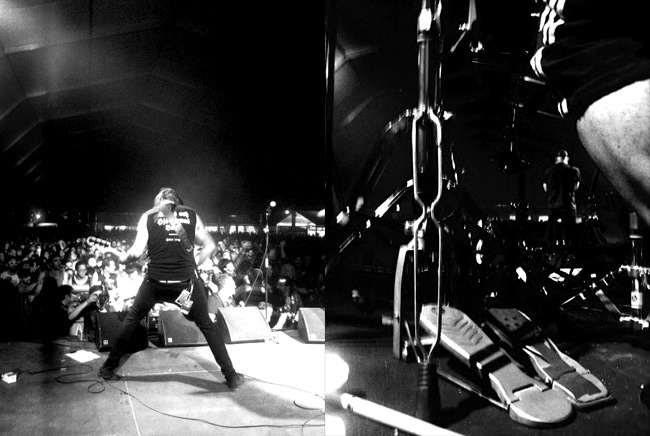 Arty-farty renditions of the Resurrection show.

After the show we had time to cool of and meet up with some friends. Some of the Municipal Waste guys showed up and I talked a bit to Dave Witte who saw Nasum already back in 1999 during the first US tour. Although he claimed today that he was "shit faced" on that day, I remember getting a copy of his email newsletter afterwards where he spoke well about the show. This was way before the advent of blogs and social media. Some hours later we went to the hotel and shared a bus with Agnostic Front, which was cool. 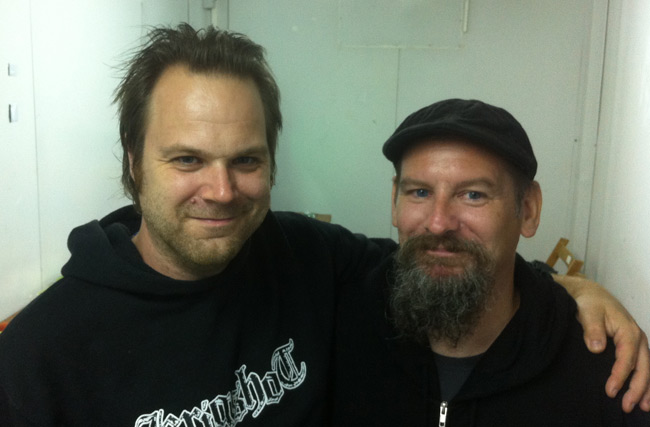 The following morning we were supposed to leave at 10, but no bus was to be seen. Well one bus came, but to pick up Reel Big Fish and Pianos Become The Teeth, so we had to wait. Fortunately, the hotel was close to the ocean so at least the view was stunning. Some in the touring party had a swim in the cold water while others... didn't. An hour later or so, the same bus and driver as on the previous day came and picked us up for an even longer drive towards Vagos. At the peak of the traveling boredom, Jesper found a microphone in the bus and started some serious entertaining telling tales about the surroundings and people in the touring party. We laughed ourselves through the boredom and got back into the good mood.

People waiting and the ocean.

The show at Vagos Open Air was very late so we had some time to kill at the hotel, which was located in the charming little town of Aveiro. Urban, Janne, Antti and I went to the town center, where I could buy some very much needed underwear... It was a beautiful sunny day and the town center was really nice. On our way back we found a very large poster for Vagos and were happy to see that Nasum was the only band on the bill to be featured with the real logo. 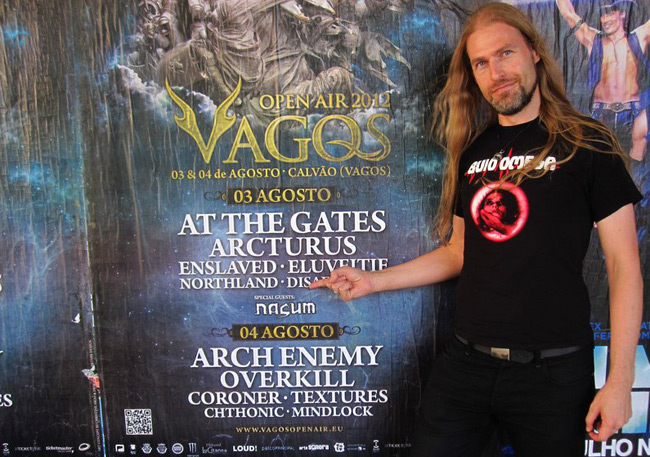 Urban pointing out the band in which he planed to play at Vagos. The semi-naked guy in the upper right corner is NOT part of the touring party.

Everyone but Hannes, Urban and I went to the festival with an earlier shuttle, to catch Enslaved's show, but they were still playing when the later shuttle arrived. Vagos Open Air was to be the first (and also last) Nasum show in Portugal, but it was also the only festival this summer where our paths would meet with At The Gates. It was fun meeting these guys who on this trip had the Danish FOH Bo Lund who has done a few tours with Nasum, and they also have two backline techs which are friends of mine from Örebro. At The Gates became our "support band" on this festival as we were closing the whole she-bang at 01:30. You can do much worse than to have At The Gates playing right before you at a festival!

Despite the late hour the show was quite good. I felt a bit worn out from the previous show, but after struggling for a few songs it got better. Nothing out of the ordinary happened during the show, and after it we basically packed our stuff and went back to the hotel for another short night of sleep. 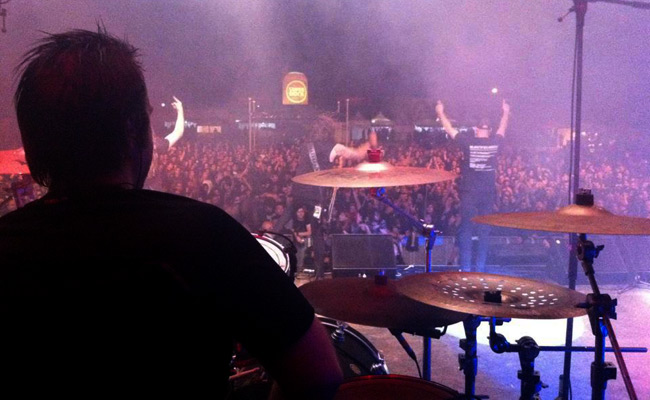 After a short drive back to Porto airport, we headed towards Wacken with a layover in Frankfurt. I was able to doze/sleep through both flights and that made up for the few hours during the night. At the Hamburg airport we got picked up by the most professional festival shuttle ever, striped with the Wacken Open Air graphics. The very comfortable van was filled with an assortment of cold drinks which made the ride to Wacken a walk in the park. Jesper and I had good memories of our previous visit to Wacken back in 2001, and this was another sign that the day would be special. It would be, because we already had gotten the news that the festival was a big mudfest, and that's not fun if you aren't properly dressed. And yes, it was a mudfest... And definitively not the best day to wear white sneakers...

For some reason the time just disappeared while we slipped around in the mud, and suddenly we were in a great hurry. The line-check got late and Urban's amp broke down. It got very stressful and backstage we were debating the set list that had to be shortened due to only 35 minutes of stage time... And then suddenly it was stage time and we played two songs before Urban's second amp broke down... We got out of the rhythm after just a few minutes and the remainder of the show became something of a race against the clock. I don't know if this was noticeable from the audience point of view, but I for one felt really stressed and didn't really enjoy the show.

With slightly negative feelings we slid back to get our first proper meal of the day, but were denied access to the Artist village and had to head toward some large crew tent for the food. While wolfing down four different types of potatoes the sky let down another burst of aggressive rain, but fortunately it slowed down and we could slid through the mud for one last time and get into the shuttle that took us back to the Hamburg Airport and some nice hotel rooms...

This was a weekend that included more or less everything, and next up is one of the most exciting trips of the whole tour - three continents in two weeks, how about that?

Previous posting:
Behind the scenes: The Farewell tour is completely booked
Next posting:
Four continents - Part 1