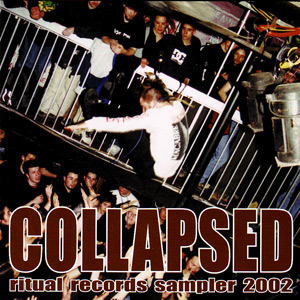 Definitely one of the most rare records with exclusive Nasum material. This sampler from Ritual Records, with appearances from Relapse, Neurot, Hydra Head and Devastating Soundworks bands, is probably not found outside of Japan, where it was released.

Surprisingly, it includes a Nasum song that has never been used anywhere else. It's a live version of "Shadows", recorded in Tokyo on our first tour of Japan. I have no idea how this song ended up on the sampler, especially since we had no idea this recording existing. It's a pretty rough recording, probably not mixed in any way with the trio version of Nasum.

"Collapsed" is worth tracking down for the rare state of the recording, but not for the Nasum song...