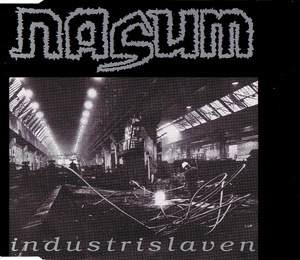 The recording of “Industrislaven” was the first time we spent more than one day in the studio. We were really quick in the studio in the early days, but this time we had the pleasure of spending a night in Dan Swanö's shitty over night apartment, but I think we actually wrote some of the lyrics and perhaps even a complete song in that apartment.

The offical closing track of the record, "Söndermald", was created with the wonders of analog recording. We recorded that song tuning down the guitars as much as possible and then speeding up the tape as much as possible, to get an even lower tone. The exact pitch is unknown but it’s really, really down tuned... Sounds sort of weird but also cool.

Worth noticing is that this record have the first vocals credits for Mieszko. He did some of the high pitched stuff. This also became the last recording with Richard as an official member of the band. When the record was ultimately released, he had left the band.

About the cover and tracklist fuck ups...

“Industrislaven” became our big break and even though I’m proud of it now, it was kind of a disappointment when it came out. We had this great idea for a cover. Mieszko found the cover picture in a luxurious book at the library and simply ripped out the page. We wanted to have the picture spread across the whole cover in a kind of light blue tone (à la the first Drop Dead CD) and then have the logo and title printed in silver.

Well, we saw the finished product just a couple of hours before our second show ever in Berlin and I was very disappointed with the result but I hadn’t the heart to tell Peter of Poserslaughter how wrong the whole cover came out.

The second disappointment came at home when I listened to the CD and found out that the songs “Mer rens” and “Ditt öde” were put together and making the whole track list wrong compared with what the cover said, resulting in our secret bonus track “Revolution II” being indexed as track 18.

As you can see by the titles on the “Industrislaven” MCD we wrote almost every lyric in Swedish this time. It started with a couple of tracks on the “Domedagen” demo and really exploded on this release. I just happened more of less. I guess we did it to push the hardcore side of Nasum into the light. It was most certainly not because the Norweigan black metal bands started to write in Norweigan!

About the vinyl edition...

We got asked about doing a vinyl edition and said yes. I had hoped to be involved in the artwork and such to rectify the mistakes on the original edition, but then all of a sudden it was released. It came out in 2004 and we brought it on the "Shift" tour.