DETAILED DISCOGRAPHY:
In Defense of Our Future - A Tribute to Discharge 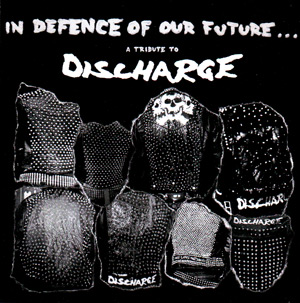 1. Visions of War (originally by Discharge)

I'm not sure how we ended up on this Discharge tribute put out by Distortion Records, but as Mieszko was in touch with Distortion regarding Genocide SS, it's highly likely that offer came that way.

We tracked the song at the same time as the "Regressive Hostility" songs, and I believe that I chose the song and picked it out. In the end I ended up playing everything but the rhythm guitars on the recording - yes, even the "guitar solo"...

We thought it was fun to put a little Nasum flavor to the song and cranked up the tempo and put some blasting to the choruses. Our long time friend Jallo (Krigshot) who was a huge Discharge fan wasn't too impressed... Ah, well...

The tribute took four years to come out so when it finally hit the scene we had managed to put out two albums in the meantime.

1. Visions of War (originally by Discharge)