The working titles of Helvete 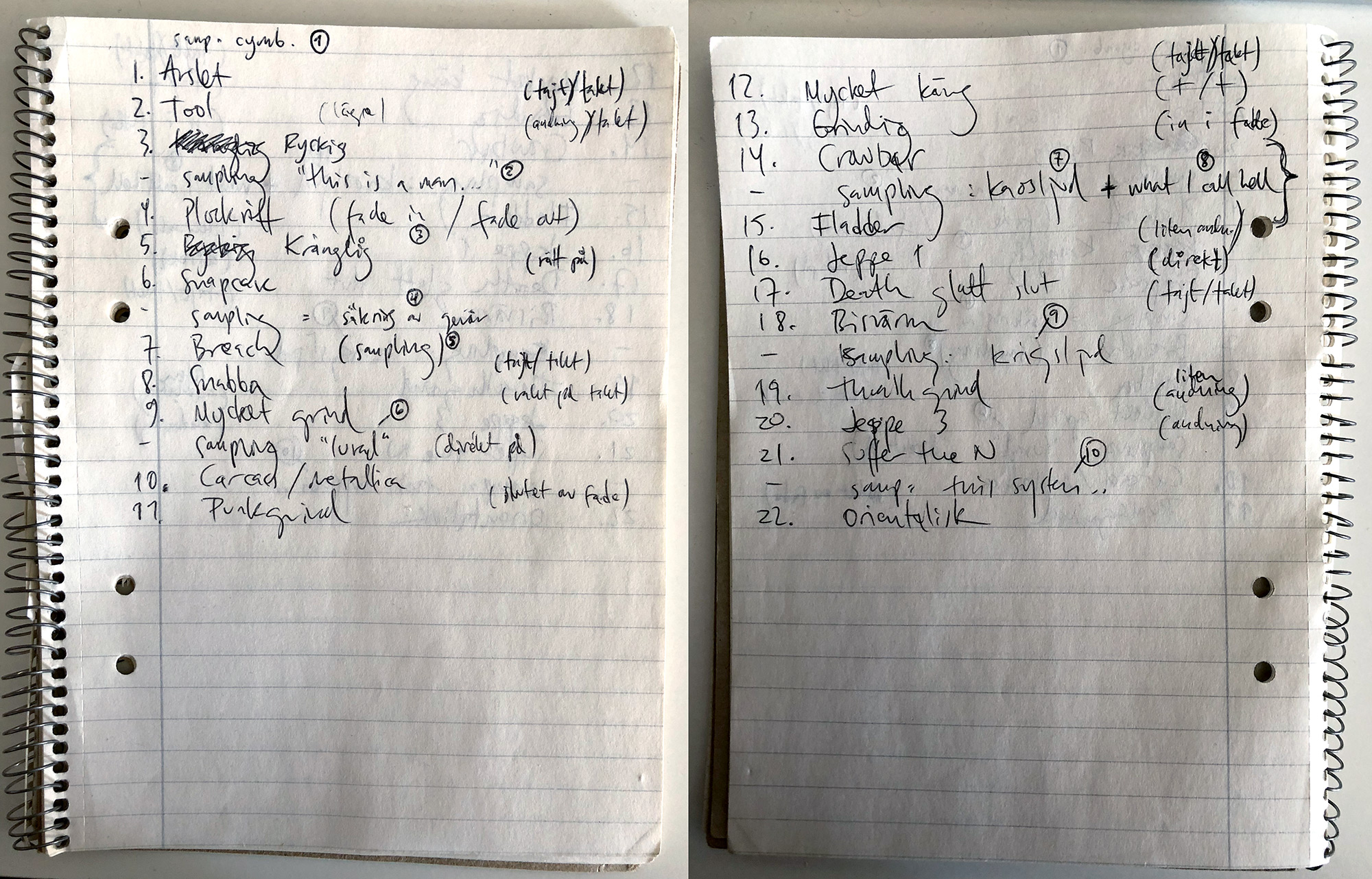 "Helvete" celebrated 15 years earlier this year. While going through some boxes in the basement I found this pages in a notebook from the moment Mieszko and I made up the final track order and distributed the samples between some of the songs.

The notes in parentheses are descriptions of the breaks between the songs, which are nothing out of the ordinary, but the fun thing about these pages are working titles. Some of them are basically the name of the band that the song was in some way inspired by, while others are a description of the unique thing of the song. And then there are the weird ones...

Here’s the list with some short explanations to why the working title was chosen. As most of the titles are in Swedish all you non Swedish-speaking people can see this as your first lesson! Here we go:

The title is Swedish for "The Arse", which stems out of "arsel" being an intensifier, as in "arselsnabb", "arselmangel" and so forth. "Violation" was a song "fast as an arse" or something. It really makes no sense in English…

The main riff in "Scoop", as played as intro, chorus and outro has a certain Tool vibe.

3. Ryckig (Living Next Door to Malice)

This is Swedish for "Jerky" which is a way to describe the short breaks and stops in the beginning of the song.

Swedish for "Picking riff", which sort of describes the unique parts of this song.

Another Swedish "-ig" word, meaning "complicated". Apparently Mieszko thought my riffs and/or arrangement was a bit of the complex kind.

I would imagine that this reference to the hardcore band is connected to the final part of the song that sort of sounds like Snapcase.

Yet another title referencing another band. We loved Swedish Breach and they certainly inspired this track.

Swedish for "The fast (one)", as if this song is faster than any other on the album?

"Lots of grind" is the translation of this title, which came out of the multiple blastbeat parts in the second half of the song.

Well, how about that? Two "band titles" in one song! The intro made us think of Carcass for some reason and the following verse riff is basically a version of Metallica’s "Battery" riff. Thus: "Carcass/Metallica".

This song was inspired by the hardcore punk based blastings of Drop Dead, so the working title and the final title is no surprise…

"Käng", short for "kängpunk", is the Swedish word for crust punk or d-beat based punk. The word "känga" or "kängor" is actually "boot" or "boots". Anyway, this particular title means "Lots of d-beat parts".

Yep – Crowbar brought the inspiration for this song.

The title means "Flutter" and is a reference to some riff in the song that has some quick finger movements.

This is a weird one. "Death" is not a reference to the band, but to "death metal", and "glatt slut" means "happy ending"… Of the song, that is, you pervert! So: "Death (metal) happy ending (of the song)".

"Bisvärm" is a descriptive word for a certain type of riffing that was made popular by Eucharist and At The Gates (among others) in the 90’s. It’s "Bee swarm" in English and you know what kind of riffs I am talking about.

This was the song we wrote with the sole intention of bringing Shane Embury to the studio to track some bass (which also happened). It has a certain Napalm Death vibe, and perhaps some extra inspiration from "Suffer the Children".

The title means "Oriental" which came out of a long intro to the song that we cut during the mixing process. It was a semi-improvised part that had a certain oriental sound, and it was featured all the way until the mixing when we decided it was too weird and that song benefited from a more direct start.

Would you like see more stuff like that? Support the Go fund me page for The Rare Nasum or buy the "Inhale/Exhale" rehearsal for as little or as much you want. There are lots of stuff in the vault just waiting to be unearthed…